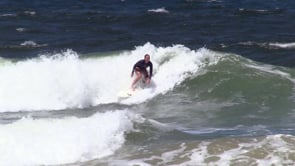 A surfing trait that developing surfer should consider is whether they ride their waves for their full functional length. That is, riding a wave so that the full manoeuvre potential of a wave is achieved. This may be just performing a re-entry finish on a closeout wave for example, or 3-4 manoeuvres on a quality down-the-line wave.

What many surfers display is a hesitancy to fully complete a ride if it doesn’t match their expectation of what the wave offers them, or they kick-out because of frequent past errors when faced with a particular section of a wave or finishing manoeuvre. Often it’s out of frustration or a fear of failure that causes these early kick-outs.

For example, a surfer will kickout early if they enter a flat section on a wave after performing a number of manoeuvres, frustrated by what the wave presents to them. In these situations, surfers could often surf through these flat sections to finish the wave in the shore break. Or, because of regular errors when finishing, surfers will simply not try to finish their waves because of their learned experience that says – “Don’t even try to finish, you won’t make it”

These two examples highlight negative situations [and there are others] that if performed often enough act as barriers to improved performance.

Riding waves for their full functional length teaches surfers to push through surfing situations that aren’t necessary enjoyable, so they learn the valuable surfing traits of perseverance and “going for it”, thus breaking performance barriers in the process.